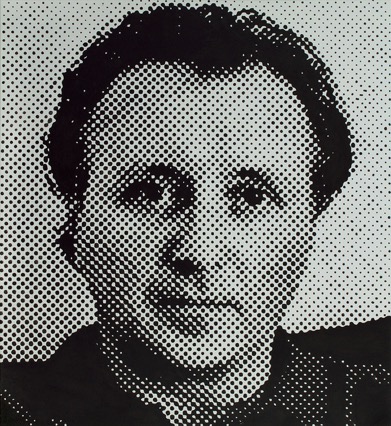 “Painter, professor at the Academy of Fine Arts (Vysoká škola výtvarných umení) in Bratislava, Slovakia. Born august 18, 1959 in Svodov (Želiezovce). Until 1978 lived in Komárno. Studies: 1974 – 1978 study on photography at the Secondary School for Applied Arts (Stredná škola umeleckého priemyslu) in Bratislava; 1981– 1987 study on restoration of painting at the Academy of Fine Arts (Vysoká škola výtvarných umení) in Bratislava, 1990 –1991 – G. v. Herder– prize scholarship, Academy of Fine Arts (Akademie der bildenden Künste), Vienna, in prof. Arnulf Rainer’s studio. 1993 – Artest study stay participant in the BINZ 39 Foundation, Zürich, Suisse. Since 1990 active as a painter, printmaker and designer. Since 1990 working also as a teacher at the Department of Painting of the Academy of Fine Arts and Design (Vysoká škola výtvarných umení) in Bratislava, since 2005 as a professor of the academy. By his cooperstion with the musician Martin Burlas since 1991 known also as a musician, composer and songwriter (see discography). In his CV is more than 60 solo exhibitions and many participations in group exhibitions in Slovakia and in abroad. 2004 represented the Slovak republic in a trio project at the 26th international biennal in Sao Paulo, Brazil. (see exhibitions) More in his “monograph” Ivan Csudai: Vita brevis, ars longa, (Peter Michalovič, 2010 Slovart) He is living in Bratislava.”